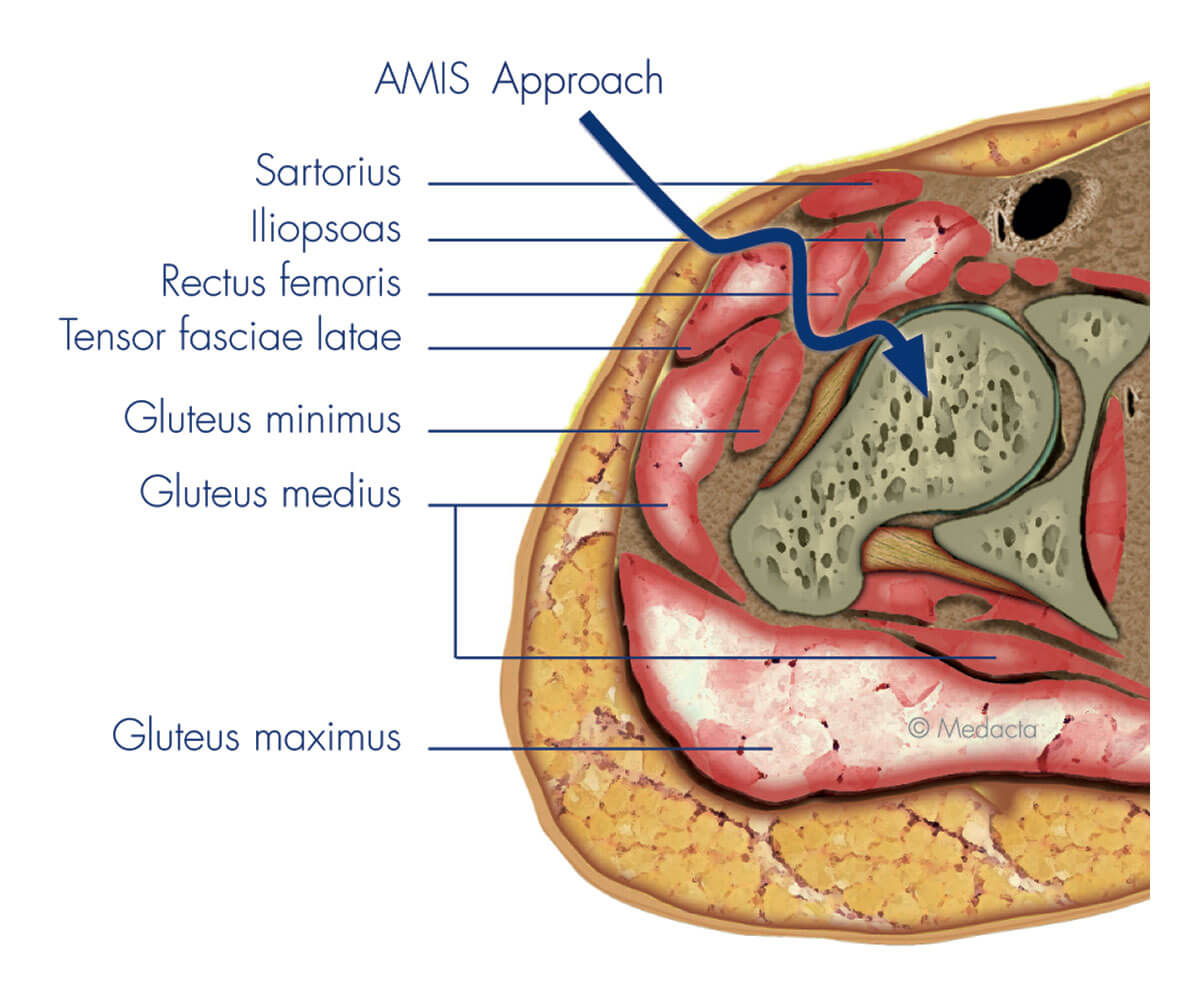 An explanation of terminology

Tony Dunin first developed experience with the anterior minimally invasive approach (AMIS) when he worked with Professor Emile Letournel in Paris in 1986. He was impressed with the results of hip replacements done using this method but it did require the use of a special operating table that was not available in Australia until 2007.

Medacta, a European orthopaedic company, has been working with surgeons in Europe to develop a special operating table and special instrumentation to facilitate the use of the anterior minimal incision. Although there are several other so-called minimal approaches, the anterior approach is the only one that does not involve cutting any tendons or muscles. The technique does involve a different approach from that performed by most surgeons.

In 2008 Tony Dunin first attended a learning centre in France to familiarize himself with the technique using the special operating table and instrumentation. He has now performed approximately one thousand operations using the AMIS THR. He has been teaching this approach to surgeons in Europe, Japan and Australia. Although there are only a small number of orthopaedic surgeons performing this procedure in Australia, it has gained wide popularity in France, Germany Switzerland and more recently in the USA.

Francis Ma has had extensive experience with this technique. He has attended multiple workshops in the direct anterior approach both in Australia and Europe. He has received mentorship from Tony Dunin while developing expertise in this procedure. Francis routinely uses the anterior approach for total hip replacement for arthritis as well as for neck of femur fractures. He actively involved in the training of registrars and fellows to use this approach.

Advantages of the Direct Approach to Hip Replacement

There have been several published articles demonstrating an earlier return to independence using AMIS compared with traditional approaches. At this stage there is no study demonstrating a long-term advantage with AMIS. How long AMIS continues to have the better functional outcomes remains debatable. While several published reports suggest the outcomes are equal at three months there have been several reports including two from Australia showing improved outcomes with the direct anterior approach at one to two years after surgery.

Type of Prosthesis for AMIS

The acetabular and femoral components inserted in this operation are very similar to those used for total hip replacements performed through traditional approaches. The Australian Joint Replacement Registry has shown that these components have low revision rates.

There is a choice of moving bearing surfaces for the direct anterior hip replacement. The options are either cobalt chrome on high cross-linked polyethylene or ceramic on ceramic. Both have their advantages and disadvantages and the choice of bearing surfaces can be discussed at the time of the consultation. Generally ceramic on ceramic is used for younger more active patients.

The vast majority of patients with osteoarthritis of the hip are suitable candidates for the direct anterior approach. However, it is not indicated in patients:

It should be noted that the care of patients undergoing the direct anterior approach varies in the following ways.