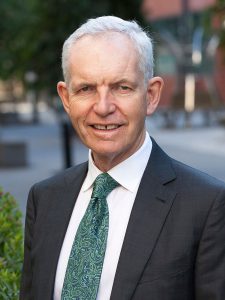 Tony Dunin has practiced as an orthopaedic surgeon in Melbourne for more than thirty years. He specialises in reconstructive surgery of the hip and knee. He has had considerable experience in hip and knee replacements and has been a pioneer in the development of the direct anterior approach for hip replacement surgery. He has performed close to 1700 cases with this approach . Tony first learnt this technique when working in Paris as an International Fellow with Professor Emile Letournel, a world renowned pioneer in hip and pelvic surgery. Tony is regularly involved in teaching the direct anterior method for hip replacement to other orthopaedic surgeons both nationally and internationally.

Tony has had several leadership roles within the orthopaedic community. He has served for seven years on the Federal Executive of the Australian Orthopaedic Association(AOA) and has been Chairman of the Victorian branch of the AOA. Tony has been in a consultant position at the Orthopaedic Department at St Vincent’s Public Hospital since 1986. He has now retired from active clinical practice at St. Vincent’s but continues to hold an Honorary Visiting Medical Officer position. He has been involved with clinical research into joint replacement outcomes.

Tony’s private practice is located solely at Knox Orthopaedic Group which is situated within the grounds of Knox Private Hospital in Wantirna. He is the principal supervisor of the AOA approved Fellowship in anterior hip replacement and lower limb surgery teaching surgeons from Australia, New Zealand and overseas.

Tony has had an interest in improving the outcomes following joint replacement surgery particularly the length of stay. He has now commenced practice at Vermont Private Hospital. This hospital conducts a multidisciplinary coordinated program to allow patients to be discharged usually within one to two days following their hip or knee replacement. Australia has lagged behind other countries in developing same day or overnight joint replacement surgery but it has been well established for some years in Europe and the United States of America, and is shown to not only reduce length of stay but to improve outcomes.

Tony is a Fellow of

He is a member of