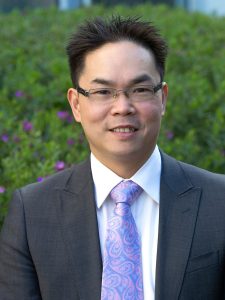 Mr. Francis Ma joined Knox Orthopaedic Group in late 2011 and aims to deliver a high quality and efficient orthopaedic service to the community in the eastern suburbs. He has a particular interest in hip and knee surgery, general orthopaedic trauma and sports injuries.

Having graduated from the University of Melbourne in 1999, Francis completed his internship at the Royal Melbourne Hospital. His specialist orthopaedic training was undertaken in the Victorian training program.  He was awarded the Australian Orthopaedic Association Registrar Prize in 2008 as the highest ranked registrar in Victoria and Tasmania. After completing his specialist training in 2009, he was appointed as an Orthopaedic Consultant at St Vincent’s Public Hospital and Maroondah Hospital in 2010.

He undertook fellowships in the UK where he gained invaluable experience with complex hip and knee replacements, including difficult primary and revision (redo) replacements at the Royal Infirmary of Edinburgh.

A second fellowship at the University Hospital of Coventry and Warwickshire in the UK, provided him with first class experience in hip arthroscopy, used in the management of femoroacetabular impingement (FAI), hip and groin pain and sports medicine in the active adult population including elite British athletes.

Returning to Australia in the second half of 2011, Francis spent a further four months visiting local arthroplasty surgeons (Mr Tony Dunin and Mr Neil Bergman) and hip arthroscopy surgeons (Mr John O’Donnell and Mr David Young) to further refine his techniques and experiences prior to starting private practice at the end of 2011.

Francis’ special interests and expertise include:

Since the start of 2015, Francis has been a co-supervisor of an AOA approved clinical fellowship in anterior hip replacement and lower limb reconstructive surgery teaching surgeons from Australia, New Zealand and overseas.

Francis is a part of the regular oncall Orthopaedic roster at Knox Private Hospital.

Francis is a Fellow of